I’ve been following the Fitbit craze since January of this year, and have loved every second of it. My poor Fitbit Charge HR had fallen victim to the standard problems of deep screen scratches, cracks running down the plastic and the band bubbling, basically in simple terms, it looked awful. Of course I was a little nervous about purchasing another Fitbit, but ultimately decided I couldn’t function without it, so with a reasonable discount code in hand, I decided to order a Fitbit Blaze. One week on, I’ve pretty much fallen in love with it, and can’t stop showing it off to every person that I know. The Blaze is a huge improvement on my previous HR, and I certainly feel like I’ve been missing out for the past seven months. Here’s what I’ve found good about the blaze so far:

Right until the last minute, I had full intentions of ordering a Charge 2, but due to the discount I had, the price difference between the Charge 2 and Blaze was a mere £10. One of the factors that swayed me was the aesthetics. I always found it heartbreaking that I couldn’t wear my old Fitbit on a night out or a meal, therefore losing precious steps, and personally I felt the same about a Charge 2. Despite the fact the Charge 2 was more attractive than the HR, I still felt it looked out of place on a night despite the fact you can change the bands. To me, the Blaze looks a lot more like a watch, and with exchangeable bands you can easily customise with metal or leather to match your jewellery, whilst still having an upmarket, smartwatch feel.

With fashion purposes aside, lets get onto the actual fitness aspect of the watch. My favourite new setting is the ability to track your exercise manually. I always found on my old Fitbit that sometimes it would lag behind, or not account for some of the exercise. With this added feauture, I can not only register more exercises (treadmill, weights, stairmaster, hikes etc.) but I can view the time, steps, calories and pace for the exercise I’m currently doing in real-time, not to mention it is also a lot more accurate at counting the steps – all of a sudden my twenty minute run is 4,000 steps instead of 3,000. Another aspect I’m beginning to enjoy is the use of Fitstar. With my previous Fitbit, I found Fitstar to be rather useless as following the exercises whilst having to constantly look at my phone was difficult. However, the use of Fitstar straight from the screen with guided workouts is much more useful, and I find myself quickly doing a ten-minute workout when I have spare moments due to the reduced hassle of having it right there on my wrist.

There are also little improvements I’ve noticed on the Blaze compared to my Charge HR, my favourite of which being the reminder to make you do your hourly 250 steps. Before I’d forget, or I’d lose track on how many steps I’d done that hour and just assume I’d completed the 250 so now I find myself completing my 12/12 hourly steps much more often. The further in-depth sleep cycle analysis is also more insightful than the previous version. I like being able to keep track of my sleep as I often struggle to get my head down for the entire night, so being able to track the different sleep zones (light, deep, REM, awake) can be great, and has helped me realise which pre-bedtime activities help with a good night’s sleep. The last small change I like is the cardio fitness calculation. This is a great little feature in my opinion, because now that I can see my cardio fitness level, I want to improve it as much as I can, and its so motivational watching your score increase as you slog out hours on the treadmill! 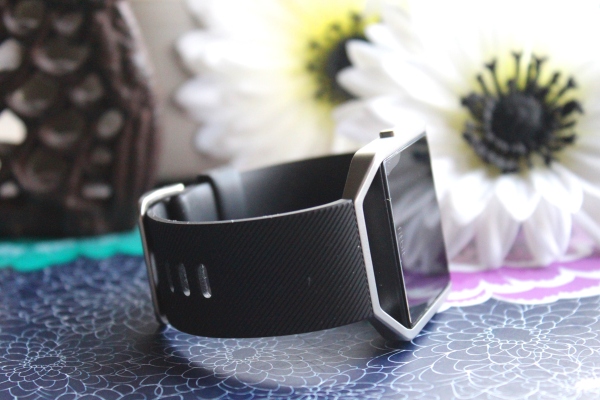 Now, I can’t decide if I’m being biased, but I’m struggling to find any reasons why I dislike this product. If anything, the watch is a little uncomfortable to sleep in, it’s a little heavy and bulky which will definitely annoy some. Admittedly I’ve woken up a couple of times and had to pull the watch down as its ridden tightly up my arm. Prior to purchasing, I also read reviews that the Blaze screen is somewhat easy to scratch, however I quickly eBayed a screen protector (you may have seen on the photos that I’ve clearly done a terrible job of applying) for this and am yet to have any problems, I certainly didn’t want to risk scratching the screen after the horrendous scratches that appeared on my Charge HR within a month. The battery life seems a little shorter than my previous version as I’ve so far only managed around four days charge compared with the five-six days I had with the Charge HR, but this is possibly due to me constantly looking at my shiny new toy more and playing around with the settings, so I guess only time will tell with this one.

All in all, I’m thoroughly enjoying this new fitness tracker and have certainly been recommending it to everybody I know over the past week. Eventually I will be getting round to writing a post on why you should get a fitness tracker, but until then, you’ll just have to trust me!

View all posts by abeautifuldistance

13 thoughts on “One week with my Fitbit Blaze”

There was an error retrieving images from Instagram. An attempt will be remade in a few minutes.